Who doesn't love the water? Here is an adorable cottage sitting high above and overlooking beautiful Queechy Lake, that's waiting for you. In need of renovation, but offe...

Motivated Seller! Complete your Barndominium! 2 pole barns on just over 4 acres, seated on a completely usable lot with beautiful views of the Berkshires. The 1st barn is...

Welcome to the Donnelly House, circa 1760. Listed on the National Register of Historic Places, thischarming period home is situated among 24 lush acres and a stunning vis...

This lovely 34 acre parcel sits at the intersection of Lillie & Beebe Pond Road. The front of the parcel contains approximately 16 acres of highly desirable usable space...

Redd Rock Estate Property 60 acres of old growth woods, clearings and old turnpikes along a substantial creek. Build along Route 24 or use an approved bridge site to buil...

One of the most spectacular views in Columbia County. In an area of fine homes, the long driveway winds past a serene pond to a dramatic site looking over hills and valle...

Canaan NY Land 5 Acres For Sale Inground Perc. This 5 Acre parcel is wooded on a quiet road in an area of fine homes. Convenient to Tanglewood, Jiminey Peak, the Taconic ... 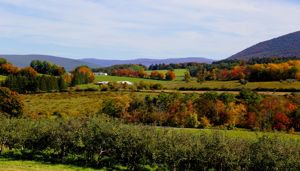 Canaan New York Homes for sale includes 20,770 acres in northeastern Columbia County along the Berkshire Mountain line, in the lovely Hudson Valley of New York. The first settlers arrived near 1759 and the area was founded as King’s District in 1772.

The town’s name was changed to Canaan in 1788. One of the oldest areas of Canaan is now Frisbee Street, originally Frisbie Street settled in 1770 by Gideon Frisbie from Canaan Connecticut. Frisbee Street fronts what was once the Albany-Boston stagecoach route.

Canaan’s topography is a mix of mountains offering some of the farthest views of the Catskills in the county, as well as a patchwork of fields lined by stone walls dating back to the 1700’s. The Taghkanic range is along the eastern border, and geologically offers commercially valuable formations of slate and magnesium limestone. Canaan New York Homes for Sale will give you access to these beautiful views and formations. 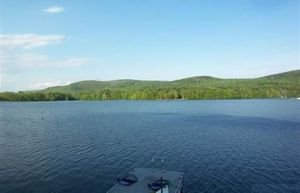 Settlement began as early as 1750 when Asa Douglas purchased the Six-Mile-Square tract from the Stockbridge Indians for £250. There was a strong Tory element in the district sufficiently large to keep active and alert the opponents of Great Britain.

During the Revolution, many of the loyalists left the district to join the British, while others remained at home to aid the invaders in every possible way. Neighbor suspected neighbor, and bitterness and enmity were engendered that the treaty of peace failed to remove. Against loud protest, a part of the town of Austerlitz was formed from its territory in 1818. Later that year New Lebanon was added. In 1776 forty-two path masters were appointed, evidence that attention was paid to the improvement of the highways. 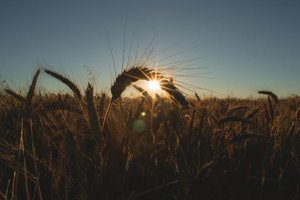 There has been considerable manufacturing in Canaan’s history such as paper mills, tanneries, saw mills and wool carding machines. A few grist mills were operated before the Revolution, the most important of these being that of Col. William B. Whitney at Queechy Lake. While the colonel was absent in the army, some of his Tory neighbors set fire to his mill, destroying it with a large quantity of grain belonging to the government. Another mill was erected on the site which was used until the mid-1900’s. Colonel Whitney also carried on an oil mill, which was later converted into a plaster mill. Early in the century a satinet factory was operated west of Canaan Four Corners. It was succeeded by a small paper mill. 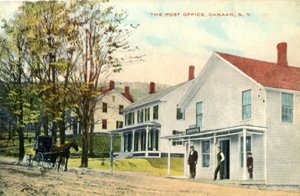 Forward to 1985 when Redline Engineering inaugurated the largest and most thriving town business, catering to the most discerning car enthusiasts from principally New York City and Boston.

Other, more modern, interests and activities are also available near Canaan New York homes for sale. Hilltop Orchards will entertain you with their new ice wine, apple picking, full moon trek and bonfire. Try Jiminy Peak's Mountain Adventure Park or Bousquet's Adventure park in the summer months, or ski at either place in the winter. Swim, boat, or float and play at the beach at Queechy Lake.

Glass blowing artists will be your neighbors at your new Canaan New York homes for sale purchase. The Tendai Buddhist institute is located in Canaan, NY, and they offer classes and workshops as resources for the community. The Canaan General Store will help you with homemade bread and small household items.

Tanglewood is only 20 minutes from Canaan New York Homes for Sale and you and/or your guests will be able to enjoy lovely live music in the summer months. 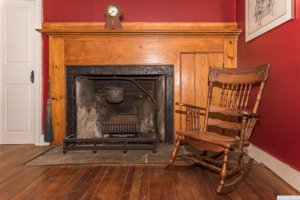 Preferred Country Properties would be happy to help you with any of your real estate needs regarding Canaan New York homes for sale, and the rich history in the area, and we look forward to working with you.